I'm Gonna Have a Law Named After Me 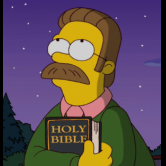