Texas law regarding firearms during a declared state of emergency 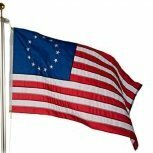