If you carry a gun on your hip, then your gun belt is the whole foundation of your carry system.  Years ago, I discovered the value of having a good gun belt.  It turns carrying a pistol from “always hitching up my pants” into “comfortable stroll.”  Unfortunately, I figured this out at a time when money was in exceptionally short supply for me and my family.  That meant that $100 for a belt was out of the question.  Every purchase had to be very carefully examined.  I read reviews and return policies, to a ridiculous degree, because we just couldn’t risk wasting money.  During this process, the Aker B21 gunbelt was recommended by a friend of mine.  It cost $55 in 2009 or so, but that was considerably less expensive than its competitors.

I had only been carrying a pistol for a couple of months at that point, but I was carrying a government profile 1911 and two spare mags.  I wear a suit and tie to work, and as you might imagine, that load placed quite a bit of strain on my Cheapo brand dress belt.  My first holster was a DeSantis Speed Scabbard, and I later added a Theis hybrid inside-the-waistband (IWB) holster.  Eventually, I moved to a lighter pistol – a Glock 19 to be precise.  I carried that 1911 for 3 years and have carried the Glock for the remaining 4.  I give you all of this history just so that you have an idea of what kind of wear and tear I put on my B21.

The B21 is described on Aker’s website[1] as having “all the features of a premium dress belt, and includes a reinforcing strip of polymer to prevent weapon rollover or sagging.”  Aker claims that the B21 is “a concealment belt that doesn't look like a gun belt.”  Aker is right.  The B21 doesn’t look like a gun belt.  That’s one of the reasons that I chose the B21.  (A black basketweave belt just does not go with a suit.)  The B21 is available in black or brown, with chrome or brass for the buckle and keeper.

I got mine in brown with chrome.  I loaded it down with the 1911, a couple of magazines and the occasional multi-tool and it served me well.  As you can see in the photo below, the chrome buckle has held up well.  There is some minor scuffing, but no flaking or peeling, and this is after 7 years on the Spats McGee Zero Maintenance Program.  The buckle is affixed to the belt using snaps, so I could easily slide the buckle and keeper off for use on another belt, should I so desire.  I’ve recently retired my B21 to yard work duty, but I will one day do just that. 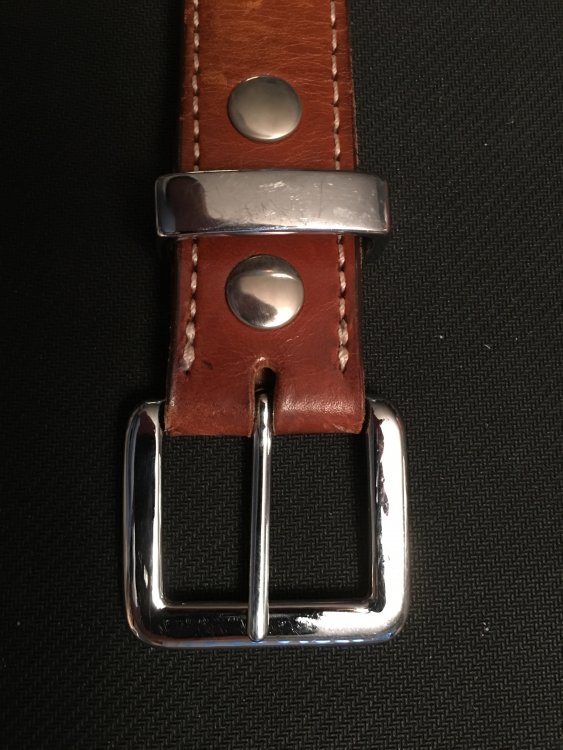 Despite the belt’s enrollment on the SMZMP, the leather has fared well, in my opinion.  In the picture below, you can see the condition of the leather.  My Theis IWB holster came with metal belt clips, and the scuffing that you see is the result of sliding those clips off of the belt a couple of times per day.  The lighter half of the belt is the upper side, where the clips scraped the leather during holster removal.  I suspect that other wearers could reduce the amount of scuffing by using a little more care than I did, or perhaps the occasional application of shoe polish. 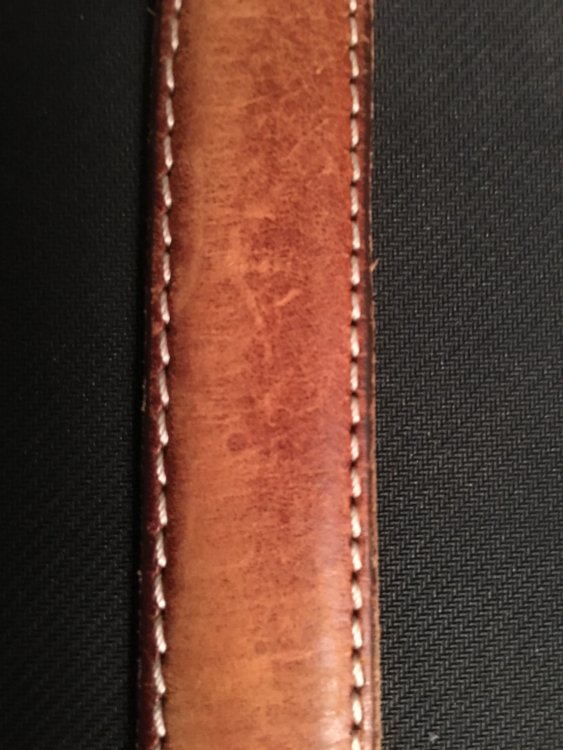 As an Original Fat Boy, I have a tendency to cinch my belts down pretty tight.  This was especially true when I was carrying the 1911 inside my waistband.  That makes me hard on belts.  You can easily identify the holes that I used most often, where the leather has darkened and cracked from my folding the belt back to buckle it.  You may also note that the holes are somewhat elongated, as the leather stretched over time. 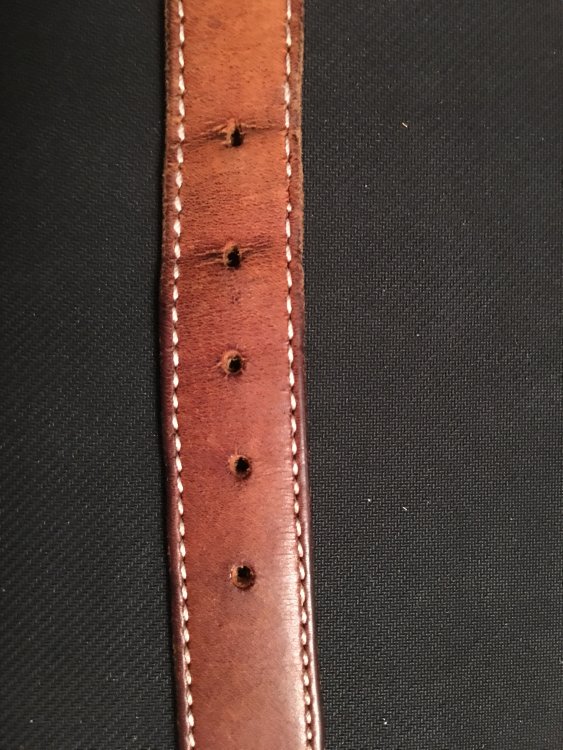 As I write this, the B21 is listed with a price of $61.50 directly from Aker.  It does a perfectly acceptable job of holding up both pants and gun, without having that undeniable gunbelt look.  The finish is not as nice as some of the higher-dollar options, but the B21 does its job and has survived my benign neglect.  For anyone in need of a less-expensive alternative to the $100 gunbelts, take a look at the B21.  It’s worth your time.

There are no comments to display.